Being Prepared for Difficult Conversations as Woman in Leadership 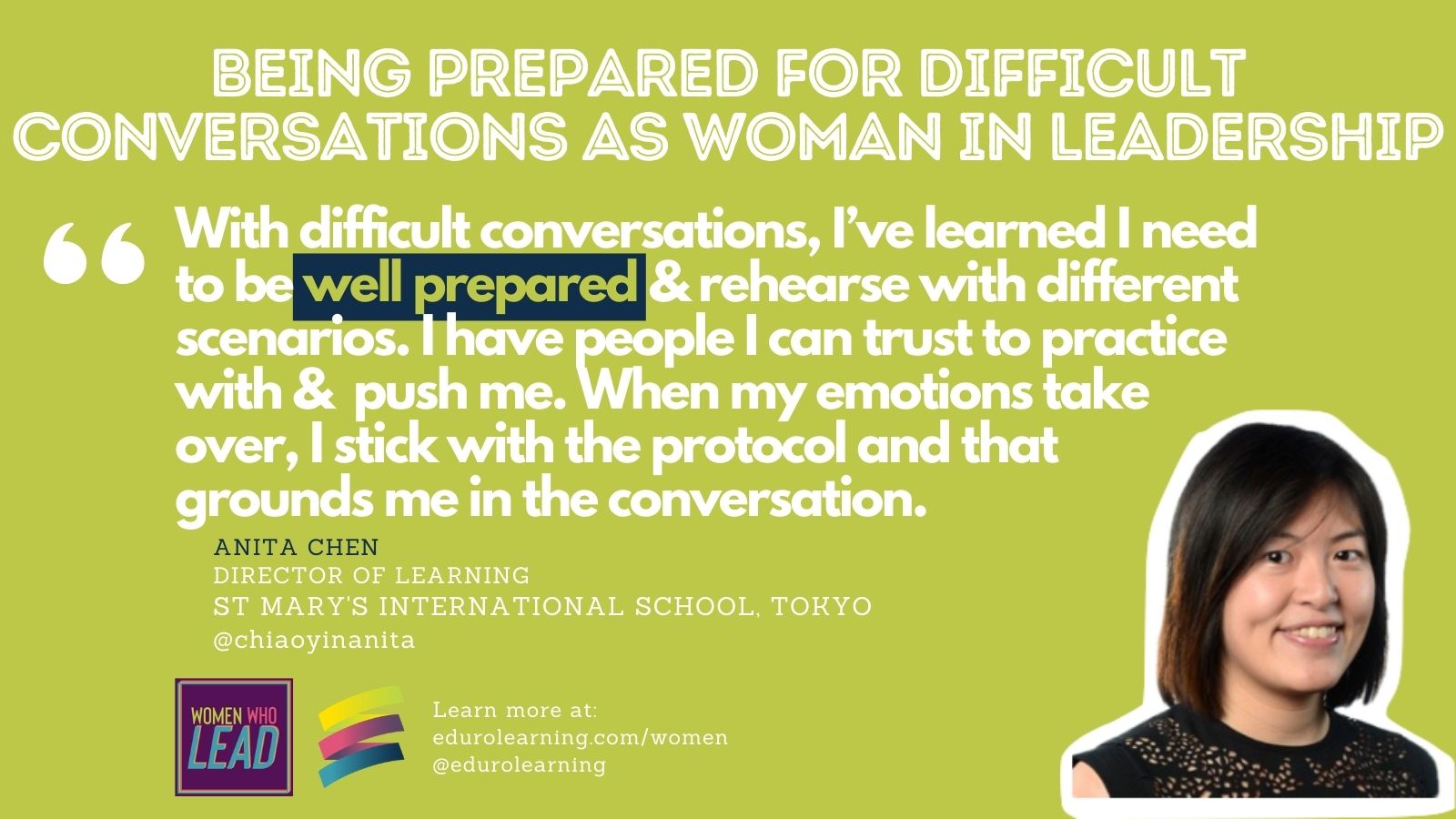 While hopefully confrontations are rare in our educational settings, they do happen, and for most educators, they’re not part of our training or our regular practice so they can feel intimidating. As with most things, the secret to feeling confident and capable is both understanding the process, and practicing your actions until there are very few surprises left.

In my last article, I highlighted strategies that could be used “in the moment” during a difficult conversation or confrontation. In today’s article I’m going to share some strategies that you might find helpful in planning and preparing for dealing with conflict. If you’re finding yourself addressing challenging conversations – whether or not you’re in a leadership role – you may find these strategies helpful.

Melanie Vrba HS Principal, Western Academy Beijing notes that you have to practice difficult conversations. She recognizes that “you have to have ones that go poorly (as well as ones that go well) so you can learn what to do and what not to do.” It’s important to prepare ahead of time, leave time and space for that conversation to happen well. Ultimately, you don’t want it to go poorly when it’s the real thing. Melanie suggests practicing in a low stakes situation like a role play with your drama teacher, because they can really push you.

When Suzanna Jemsby, Head of School at Washington International School, started her leadership journey, she had an HR director who allowed her to practice her first really big difficult conversation. They played it out in a theatrical way, and it was so necessary. She felt as if she had thought through everything that could possibly happen. When it actually came around, it was an anticlimax.  After the meeting she goes straight to her computer and sends her interpretation of the meeting. “People deserve feedback so we shouldn’t shy away from conversation. It’s important to do the follow up.”

Jennifer Tickle, Secondary Principal at Dresden International School, and former Theater Director, says she views the job title and the desk as those as props on her “set”. Although she finds these conversations difficult, she uses her “props” to recognize that people expect her to have those difficult conversations. When reflecting back she notes that even though the conversations may have been challenging, the feedback she receives is that they are grateful to have had the discussion.

Prior to any potentially challenging meeting, Jasmeen Phileen, Associate Principal at International School Manila makes sure to do her homework. She starts with the facts and speaks to all the parties involved. Doing this research before the meeting ensures that she’s prepared for all aspects of the conversation

Michele Mattoon, Director of National School Reform Faculty, doesn’t shy away from difficult conversations because “the people who push your buttons are your greatest teachers, because if you can figure out how to work with that person, then you’re learning a lot and that’s part of the practice.”

Rachel points out that “flattening the hierarchy is really important.” Building trust means that there should be more people in the room to watch the conversation so you can have a thought partner afterwards. There’s always something to learn in every conversation – even for experienced leaders. Most of the phrases and approaches that Rachel uses during accountable conversations have come from great leaders in her career, she’s gotten better because she’s had the opportunity to observe others.

On the more logistical and legal side, during some of the more complex conversations, Madeleine recommends having someone else there, either as an observer or to plan and conduct the conversation together.

3: It’s ok to be uncomfortable

Accountable conversations can be uncomfortable for everyone involved – for the person sharing the feedback, as well as for the person receiving the feedback. However, when you have started to develop the skills to share difficult feedback in a “humane and growth producing way,” as Jennifer Abrams, author of Having Hard Conversations, points out, you can move forward with the awareness that it’s OK to be uncomfortable.

Recognizing that it won’t be easy, and increasing your ability to deal with the discomfort, is a necessary part of the process. Jennifer recognizes that she started developing these skills by modeling and accepting feedback resulting in changes to her own behavior. She now has a “stronger stomach”, and has learned that you “can be able to sit with more discomfort.”

As you grow and develop your skills, (perhaps including applying some of the applicable strategies here in this article), you’ll find that you can have confidence in the way you’ve held the conversation, so that the discomfort is no longer a lack of confidence, but about the care and respect that you have for those you are speaking with.

Katie Ham, Secondary Deputy Principal at Copenhagen International School Denmark, has recognized over time that you have to be honest and fast and deal with situations quickly, rather than let things simmer. “As leaders, it’s incumbent upon us to be honest and direct; everyone deserves the opportunity for growth. In having those difficult conversations, it’s about being supportive and kind and doing it in a space where the other person feels comfortable, not vulnerable.”

Katie Koening, ES Principal at Rabat American School in Morocco, makes the same recommendation to deal with any issues that arise as soon as possible, and to not allow yourself to create a “laundry list” of issues. “When something happens that is disruptive, and I don’t jump into it and it continues, I become frustrated both with what’s happening and my lack of response. Try to focus on one thing and only then move on to the next thing – to go from item to item is not productive or helpful or being a kind human.”

Both leaders point out that people may need processing time, and giving them the space to come back to a conversation several days later can be very effective. Katie Ham notes that going back to those conversations after some time away is essential for everyone’s development, that it’s for their growth as learners – and in fact, not having these conversations would be doing them a disservice. Katie Koening recognizes that it’s not going to be all resolved after one conversation. She says: “It’s important to make sure they know that I care and I want this to go well and I want them to be successful. Sometimes things are better when they work themselves out.”

Renée Green, Dean of Student Life, SAS Singapore began her career nervous about confrontation, primarily because she knows that people may be holding on to stereotypes about people that look like her. Although she has grown and evolved, and the world has changed a bit, she finds herself still very much institutionalized, constantly thinking “am I smiling enough, being nice enough, being kind enough”. But she’s gotten to the point where she just says whatever it is that needs to be said with compassion and clarity.

Even though these conversations can be challenging on many levels, ultimately, Renée says: “we are a learning profession where we have tests and summatives, and moments of high stakes. Why do we shun some of those moments and embrace others? It’s all a part of the learning journey and if you embrace it as such it’s really not as daunting. You can build a relationship, even when it starts in a time of crisis.”

Sawsan Jaber, Founder & Consultant in Education Unfiltered comes to any difficult conversation remembering that she has bigger issues within education that she wants to focus on. This allows her to have the confidence for any individual conversation, to hold her feelings inside, because she understands that there are so many factors shaping the way people see and think, and overcoming those differences is a first step towards accomplishing her goals as an educator.

Katie Wellbrook, Assistant Principal for Academics for Singapore Suzhou International School notes that integrity is crucial. “If you’re going to have a difficult conversation, and you’re holding them to a standard, you have to be meeting that standard. Hypocrisy is the best way to break down cultural credibility and trust in you as a leader…. You have to show up and do the thing you say you’re going to do. If you don’t do it, you have to apologize.”

Handling confrontation, and leading accountable conversations can feel so intimidating. But the good news is that they are skills that can be learned, and there are strategies that work in almost any situation. This article is just the beginning of the conversation, there’s so much more inside the Women Who Lead program!

Find out more at: https://edurolearning.com/women/.