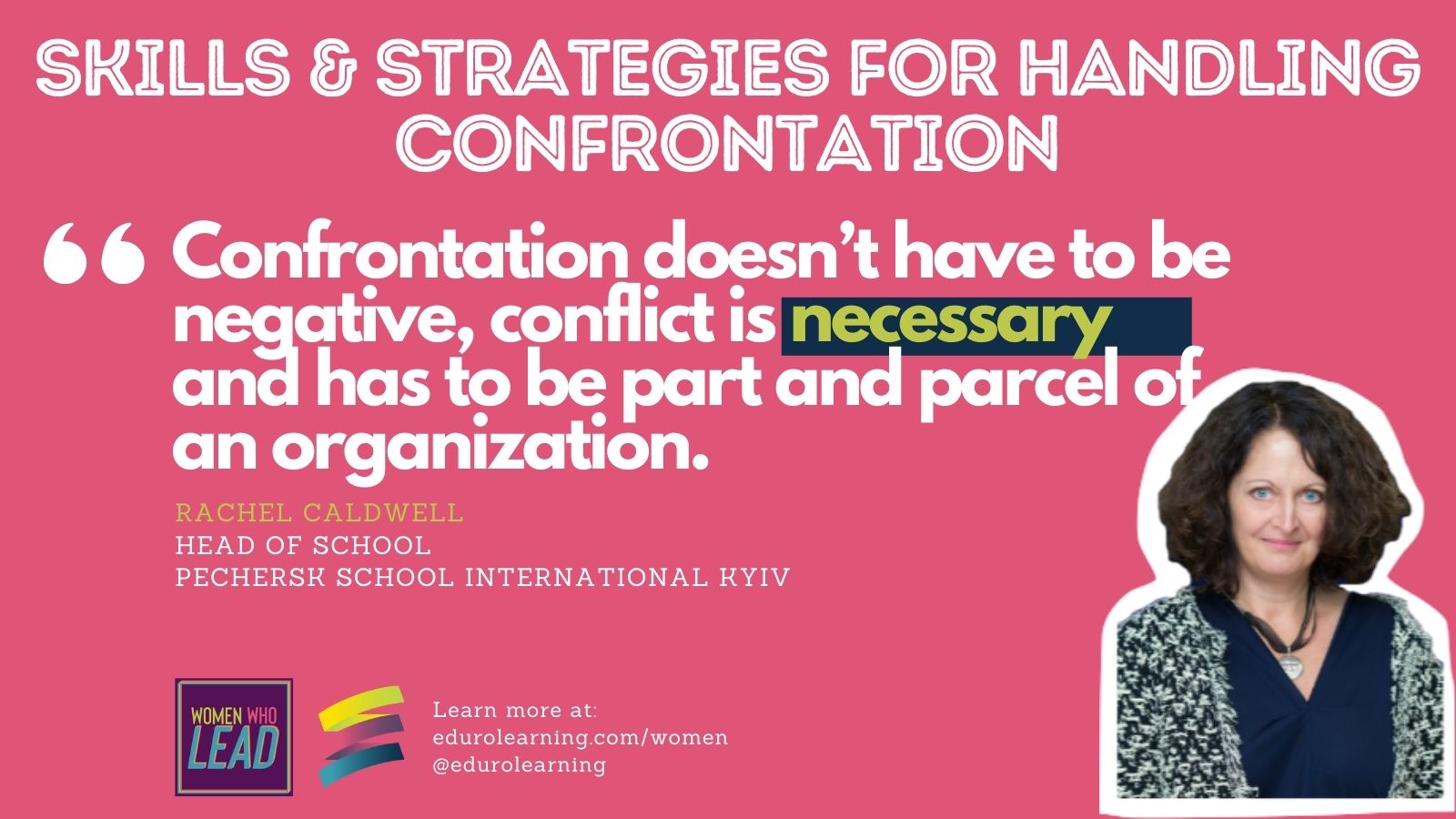 Handling confrontation, even when it’s a planned conversation, is rarely an easy task – even for experienced leaders. As Jennifer Abrams, author of Having Hard Conversations, said in her Women Who Lead interview: “We have credentials in how to teach, we don’t have credentials about how to talk effectively with other adults. And here we are working with other adults.”

For most educators, dealing with confrontation is not part of our training, and hopefully that’s because it’s a rare part of our experiences in schools, but it does happen. So, during the Women Who Lead interviews, I asked our successful leaders what they’ve learned about handling these potentially stressful conversations, so that others can learn from their experience.

In today’s article I’m highlighting 5 strategies that you can use ‘in the moment’, during a confrontation or difficult conversation, to diffuse the situation and hopefully get to a point of compromise. In my next article, I’ll share some strategies to help you build your comfort level with these kinds of accountable conversations, so that you feel prepared and confident for the future. Both of these articles are just a taste of what’s offered inside the Women Who Lead program – from actionable steps, to specific structures for individual conversations! Learn more at https://edurolearning.com/women

Many of our successful women leaders pointed out that as a leader, you need to be aware that you are in a position of power and authority. Oftentimes, even if you’re not in a formal leadership position, if there is a perception that you have greater access to school leadership or you’re in a position of influence, there may still be a power dynamic that needs to be addressed.

Madeleine Heide, Superintendent at Lincoln, Buenos Aires, says “as a leader, you don’t have to fight for that level of authority, you already have it. Therefore the other person you are entering into the conversation with doesn’t have it. You have to recognize that.” And Junlah Madalinski, ESMS Principal at Shutz American School in Alexandria Egypt, highlights: “If you don’t recognize that power dynamic, whether unintentional or intentional, you leverage that power in a way that gets what you want out of that conversation.”

Regardless of your individual interaction with a teacher, Junlah also notes that there is always a history of interactions with previous administrators that can come into play during these kinds of conversations. Spending time in relational work, creating school culture that helps build trust, empathy, understanding and listening, helps facilitate those more difficult conversations. Even if those historical challenges did not involve you at all, if you want to move forward, it becomes your conflict to solve.

She highlights that she always has the same outcome and expectations, but she might approach each situation differently – prioritizing being able to adapt her approach based on the context, to be able to let things go, and bring things forward depending on who she’s working with, as part of contextual leadership.

To ensure that you are addressing that power dynamic during a conversation, Junlah advises: “Find ways to actively dismantle that power structure. You have to be committed to ensuring that regardless of how difficult that conversation is, the person feels listened to, understood and respected. If that happens, your job as an educational leader is done.”

Grace McCallum, Head of School/Director at the American School of Brasilia, points out that not only is it important to deal with any issues that arise as soon as possible, but during the actual conversation, it’s important to get to the point right away, without any small talk. Starting an accountable conversation with small talk makes it harder to focus on the item at hand because you have “clouded the conversation with an emotional connection.” She recognizes that being clear is being kind, and starts these conversations directly by stating something along the lines of “I wanted to meet with you today to talk about… It might be uncomfortable for both of us, but we’ll get through it”, which gives both parties the permission to feel the awkwardness and dive into the tough stuff.

Sheena Nabholz, Head Of School at Lincoln Community School, Ghana recognizes that “being able to look people in the eye and give the hard honest truth has become an act of compassion. The kindest thing you can do for somebody is tell them the truth.”

Katrina Charles, IB DP Coordinator at the American School of Doha, Qatar, points out that often the act of listening can solve the problem on it’s own. In fact, people often have the answer to their own problem. She’s learned to “let people have the opportunity to talk, to get it off their chest, and in the end they realize they’ve solved their own problem.” Katrina believes that it’s often just human connection that we’re missing and the key is to be genuinely listening.

Clarissa Sayson, ES Principal at the International School of Beijing, China, has developed compassion and empathy to realize that not everything appears as it might on the surface level. People make decisions based on their values and beliefs. It’s so valuable to learn how to listen to another person so that you can understand their perspective. It’s not always about communicating what you’re thinking but instead helping another person work through their own thinking.

Arden Tyoschin, Head of School Harare International School, Zimbabwe, reminds herself when preparing for a difficult meeting that she’s happy to be convinced otherwise. She’s open minded enough to hear something that might make her think a different way, but won’t compromise her grounded beliefs in education. She comes to these meetings listening with genuine curiosity, looking for moments of “I never thought of it like that” and taking a new spark of thinking away from the conversation.

Lynn Sawyer, Educational Consultant, implements the same strategy. She notes that the best practice is to “understand the people you’re having a confrontation with also have a point of view. It will only help you if you can listen and truly understand their point of view.” You need to be able to articulate their concerns back to them, state that it matters to you, and see what you can do to come together to find something that’s going to work.

Caroline Brokvam, Director American School of Antananarivo, Madagascar, agrees, stating that often just listening actively (including paraphrasing and mirroring body language) will de-escalate or even solve the problem. Building up listening skills and compassion makes challenges easier to solve. Caroline recommends doing coaching training – even if you don’t become a coach. The skills that you learn helping people work through their own issues is a vital skill. “You can’t really solve someone else’s problems, they have to come to that on their own.”

4: Slow Down the Conversation

One highly effective strategy that you can implement immediately was shared by Kathleen Naglee, Head of School, International School Helsinki, Finland. Kathleen focuses on being a very good listener so she can slow down her reaction to confrontations. When someone is angry, she just repeats back what she’s hearing, without implying rationale. She echoes back “you’re telling me this… is this right?” This strategy provides immense relief to the person speaking, because they feel that someone heard them.

Once you have slowed the conversation down, listened and articulated the concerns back to the person speaking, Kam Chohan, CEO of ECIS identifies that it’s almost like a negotiation to get them aligned to where you want to be. She recognizes that “people need the same thing – to be valued, to be listened to. If you can reason and negotiate with them they will see there’s a different view of things.”

5: Separate the Person from the Action

Lola Aneke, Executive Directory of Cadet Academy, recognizes the importance of separating the behavior from the person. During the conversation, she’s not addressing the person, she’s addressing the behavior. Nathalie Henderson, Chief Schools Officer, Indianapolis Public Schools, comes from the same angle, taking the perspective that “it’s not that you’re right and I’m wrong. In this situation, these actions were not in the best interest of students.”

Dr. Chaunté Garrett, Superintendent of a K12 charter campus in North Carolina approaches a challenging conversation by recognizing that “my job is to serve and protect everyone”. Creating clarity around the values of the organization enables you to address challenges and misalignment head on. Then the conversation becomes about creating alignment to our values.

Nneka Johnson, Director of Innovation, International School of Dakar in Senegal, leans into difficult conversations. “We all need to be better. We all need to hold each other accountable for what we do. Difficult conversations don’t scare me, people are human. It’s just something we have to do. In leadership, you can’t shy away from difficult conversations.” She spends time building relationships, so parents and teachers know she’s coming from an empathetic lens. Once you learn that any frustration is likely not directed at you personally, you can empathize, sympathize and listen.

Handling confrontation, and leading accountable conversations can feel so intimidating. But the good news is that they are skills that can be learned, and there are strategies that work in almost any situation. This article is just the beginning of the conversation, there’s so much more inside the Women Who Lead program! Hear more from our successful women leaders and learn the exact strategies they use to have consistently successful accountable conversations! Learn from the stories of over 70 successful women leaders and build your professional learning network inside Women Who Lead!

Find out more at: https://edurolearning.com/women/