Addressing the Elephant in the Room: The Old Boys Club in International School Leadership 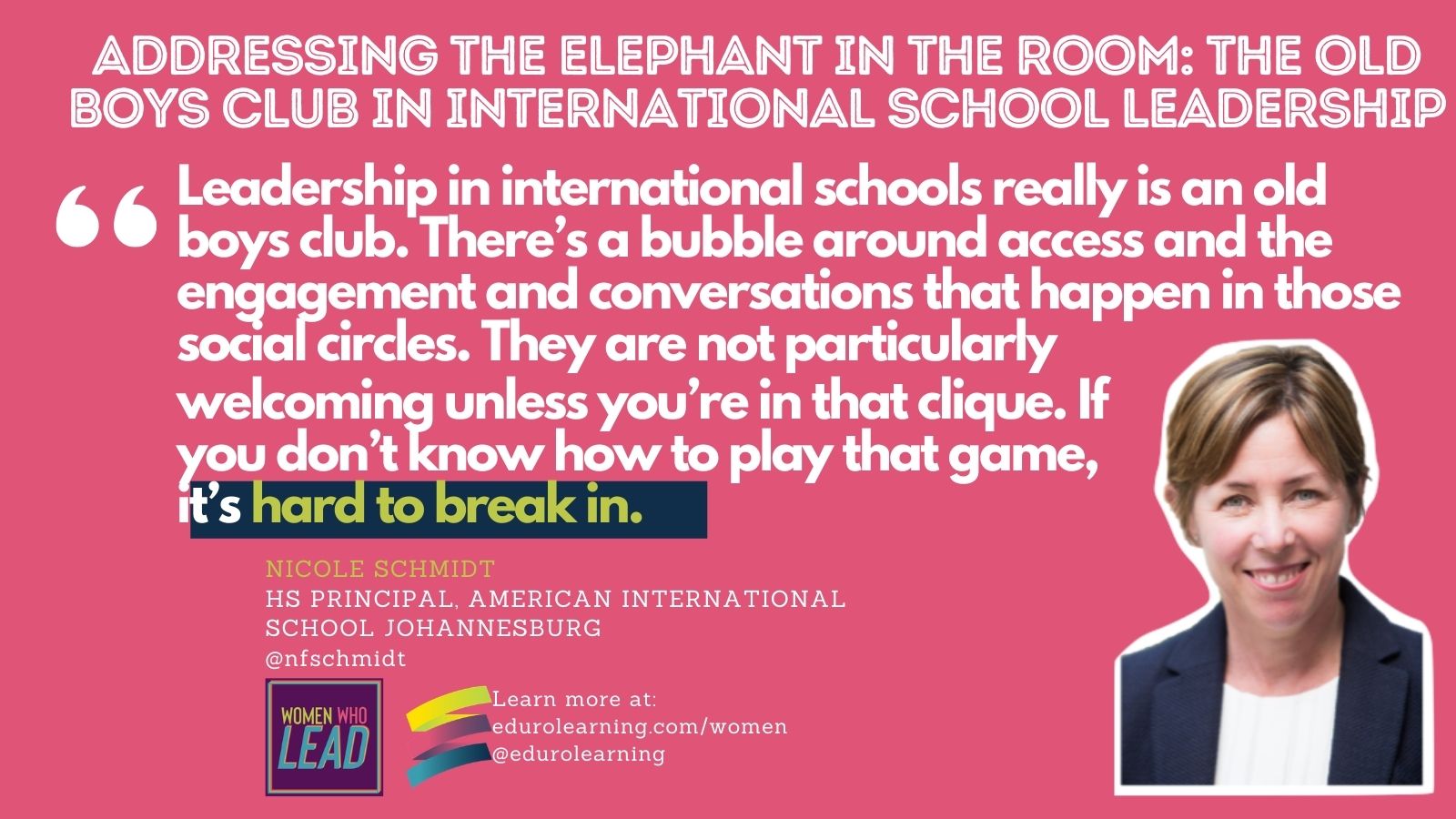 When I began the Women Who Lead interviews in early 2020, one of the challenges I was expecting to hear a lot about is the role of gender & intersectionality in breaking into the upper leadership levels of the international school community.

It’s not hard to notice in the Head of School announcements every year that the top leadership positions at international schools often seem to be passed around within the same small circle of (mostly) white men.

As the following stories will show, most female leaders have had very similar experiences in this area. Fortunately, many of the Women Who Lead interviewees have also discovered constructive approaches to move forward in spite of feeling excluded from this network of influential connections, sharing below some strategies that might help women break into this “old boys club”.

In my conversation with Nicole Schmid, HS Principal, American International School Johannesburg, she shared her experience of walking into one of the cocktail events during leadership recruiting fairs and seeing almost exclusively older white men. As Nicole states: “There’s a bubble around access and the engagement and conversations that happen in those social circles are not particularly welcoming unless you’re in that clique. If you don’t know how to play that game, it’s hard to break in. They all knew each other, they’d all been recycled through schools and they all get jobs.”

As Junlah Madalinski, ES & MS Principal at Shutz American School, Alexandria, Egypt, points out, getting a foot in the door for a leadership position is often overly reliant on who you know. It’s very common to hear that “you need a network” or “you need to put yourself out there”, but if you don’t yet have that social currency, as a newer leader, it can be so much more difficult. Junlah also notes that because the international school community is so homogenous, it’s even harder for women of color to make those supportive social connections that will help them leverage a network.

Similarly, Grace McCallum, Elementary Principal at Frankfurt International School, recalled her experience at a school heads’ meeting in Beijing. Simply because she was one of the only women, men in the room immediately patronizingly assumed she was a teacher, then kindergarten head, then finally realized she was Head of the Elementary School. Grace emphasized that she tries to use these opportunities to be bold, and stand up for what she believes is right, so she can set an example for the female leaders behind her.

Even when our Women Who Lead reached the top levels of international school leadership, like Suzanna Jemsby, Head of School at Washington International School in the US, this tight network of “stereotypical” white male leaders often continue to make assumptions about the role of the woman in the room. She shared a story of participating in her first meeting as a HOS with other HOS. When she walked into the meeting, it was all men, all quite tall, slapping each other on the back, calling each other coach. When they saw her, they assumed she was there to take notes, which of course, she was not.

Several Women Who Lead in the Technology Director position mentioned how rare it is to see anyone but a middle-aged white man in the position. Daniela Silva, Group Head of Learning Innovation at Dulwich, believes that it’s a real challenge to be a woman in the Tech Director position. In fact, she can’t recall seeing another woman in the final run with her for any of those positions. Similarly, Anita Chen, Director of Learning at St. Mary’s International School in Japan, recalls that at her first Tech Director meeting in Asia there were about 40 white men. She was the only Asian woman. The stereotype of what a Tech Director looks like ends up excluding women – even when they have extensive experience and an innovative perspective.

Carla Marschall, Director of Teaching and Learning at UWC, Southeast Asia notes that “in international ed, there’s definitely a gender, race, and age preference in who is leading international schools”.  Christina Botbyl, Curriculum Director at the American International School of Kuwait asks, “shouldn’t the leaders represent the proportion of women who are teachers?”

Katrina Charles notes the same dynamics, “For a lot of places in the international circuit, a lot of the time, a certain look is required and a certain standard is what is being paid for. What that means is that it’s a lot more masculine-heavy and -led. Because within those societies, there is a belief that only men can lead effectively. Women are rarely seen as leaders.” In her experience, Katrina has often been the only woman on the senior leadership team, or the only women, ethnic minority; or ethinic minority on a leadership team. This traditional expectation of what a leader “looks like” makes networking increasingly difficult.

Navigating the Challenge of Networking

How do our Women Who Lead tackle this challenge? Many solutions came up in the interviews that can be adapted and applied based on your unique perspective and path to leadership.

Kam Chohan, CEO of ECIS, notes that she shouldn’t be expected to “assimilate to the white male leadership that came before me. My background is an advantage.” She points out that  women of color as leaders are very underrepresented. As more women of color become leaders, we must recognize that they’re not going to be like the white American males who came before us. As Kam explains, we shouldn’t expect them to change themselves. We should expect them to be who they are, because they bring a wealth of experience. She feels that there’s no better role model for other women than being able to see people like themselves in those positions and making a difference.

Clarissa Sayson, ES Principal, International School Beijing, China, highlights that it’s important for men to be a part of this conversation, as they are the ones in a position to mentor or sponsor women in their schools and to encourage them to pursue leadership and to find out if there are any aspiring leaders in their midst.

Carla Marschall, Director of Teaching and Learning at UWC Southeast Asia, East Campus, notes that women need to have someone to talk to, to help them make sense of what they’re experiencing in their roles. Female mentors can contextualize some of the challenges that women experience, like implicit biases that may exist in organizations that men are not aware of because they might not have experienced them.

Carlene Hamley, Director of Professional Learning at ISS, shares that female leaders have amazing skills, they just don’t always know it. As she describes it, they either don’t want to know it, or they’re trying to be someone they’re not, so learning the skill of knowing who you are and what you enjoy doing, knowing your values and where you sit with certain issues, is a huge skill for aspiring female leaders.

Catriona Moran, Head of School at Saigon South International School, reminds aspiring women leaders that it’s not enough just to have the certification, it’s also crucial to demonstrate your leadership by being involved in committees, and to take every opportunity to interview. She points out that “every time we interview or put ourselves forward, we have to reflect on our beliefs, the underpinnings of our pedagogical approach, and ourselves”, which helps you become stronger in your beliefs. Plus, when you interview for leadership positions, even if it doesn’t initially succeed, you’re letting your Head of School know that you aspire to be a leader. When a role arises to lead, they may ask you. Ultimately, you have put yourself on their radar. People want to help others, and you have to let them know that you have those aspirations. “Good organizations try to grow leaders. Not so that they’ll stay with you forever, but so that they will go on and do great things at other organizations”.

The ultimate takeaway from these conversations is that all of us can do more to support women, and that everyone should try to lift up our aspiring women leaders. As Clarissa Sayson shares, “the world and our workplaces need to be more open and empathetic to women”. Each day we can make small differences to build to these changes, one step at a time. Our Women Who Lead participants may have once felt they’d never be able to break through into the “club”, but now, through the stories they tell in their interviews, others can learn from their struggles and their successes, and find out how they were able to recognize the leadership potential in themselves and identify the next steps for their professional journey. In the next article, we’ll discuss double standards for men and women in leadership positions.

Leverage Your Leadership in Women Who Lead!

Does this resonate with your personal experience? Are you ready to own your leadership and make a difference in your school community?

Explore more from our women who lead and learn how to make an impact at: https://edurolearning.com/women/.

0 responses on "Addressing the Elephant in the Room: The Old Boys Club in International School Leadership"