It’s Not Pie: Better Understanding the Lack of Opportunity for Women in Leadership 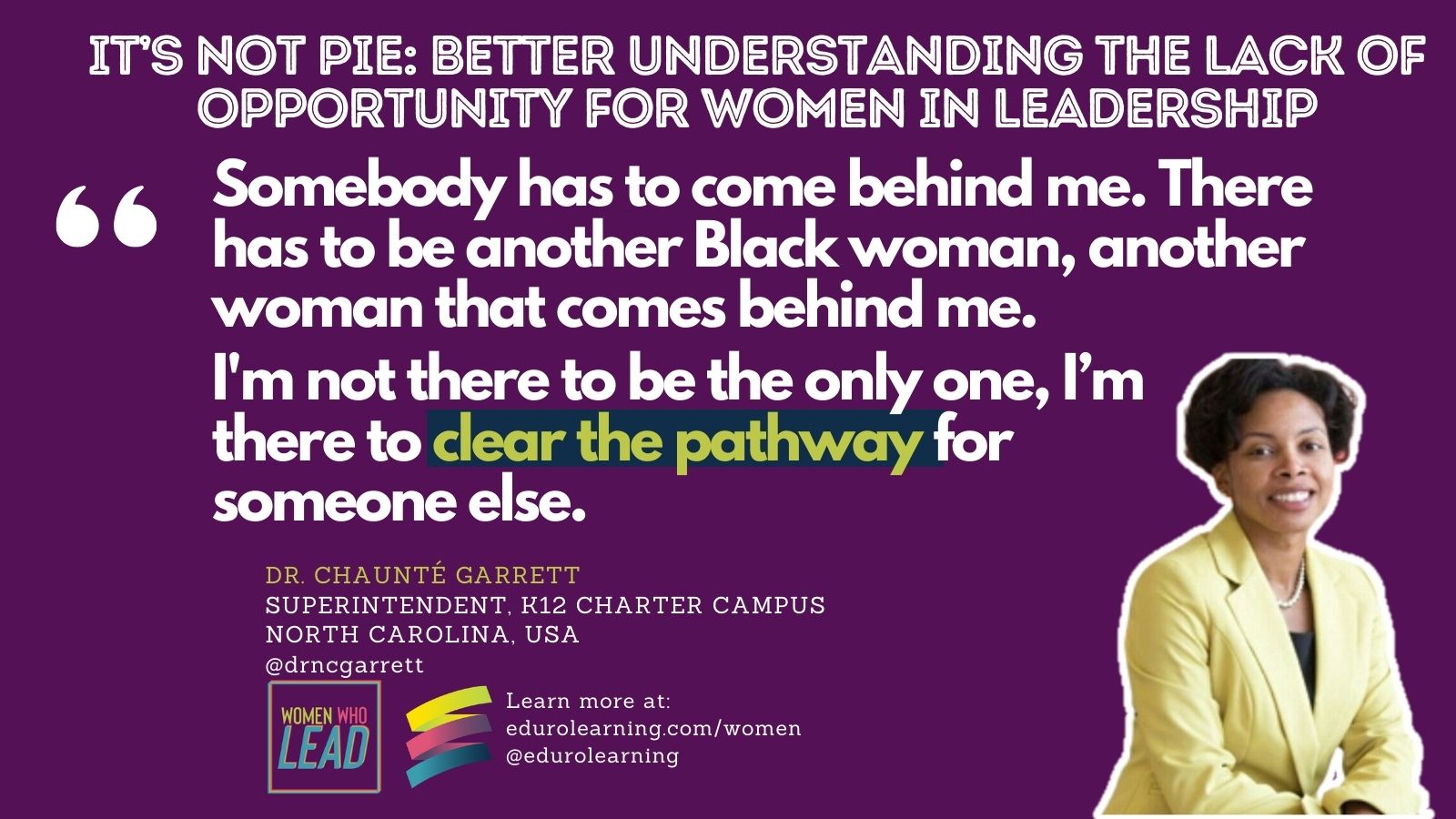 Women face an especially complex challenge around lack of leadership opportunity, both perceived and real. As we know from the data, there are far fewer women in positions of leadership in education than there are men, although the majority of educators are women. This leads to several frustrating and compounding scenarios.

In some cases, there is the perception that there are only a specific number of jobs available for women, and therefore they have to fight amongst themselves for the positions. In many cases, there is truly an inequitable hiring process that disadvantages women, either through unconscious bias, intentional discrimination or societal stereotypes. In all cases, this means women must work harder than their cis-white-male counterparts to earn a leadership position.

In today’s article, we’ll explore the experiences of our Women Who Lead in these frustrating areas – and then we’ll look forward, exploring approaches to how we can overcome these problems to build a culture of women supporting women.

A Culture of Competition

Many Women Who Lead interviewees spoke of a competitive and tense zero-sum atmosphere around female leadership positions, as if there’s a pie that everyone has to frantically grab a piece of because it’s in danger of running out. Liz Kleinrock, Anti-Bias Anti-Racist (ABAR) educator in progress, highlights that women pursuing leadership have pretty much everything going against them, from “men who unconsciously or consciously chose to lock you out of opportunities, to women who are fed all these messages how we need to be in competition with each other all the time.” When women are surrounded by other women who believe that only one woman can be successful, instead of supporting each other, it results in trying to drag each other down. Liz also talks about the prevalence of “toxic femininity”, where women amplify traits like demureness and being subservient to men, which only exacerbates societal expectations of who could and should be a leader.

Just becoming a successful leader isn’t enough, as Katrina continues, “if it’s deemed you are a leader, the words used to describe your work are not necessarily positive. You put forward a point, you’re seen as aggressive. Your voice raises too much, you’re emotional. Not the same words that would be used for a gentleman.” Rachell Caldwell, Director, Pechersk School, Kyiv, Ukraine, echoes the same sentiment, as did many others in the Women Who Lead interviews: “When you’re a female leader there does seem to be this indication that you’re not a ‘strong leader’, you’re a ‘bossy leader’”.

Ultimately, pursuing a leadership pathway in an environment where, as Nadine Richards, HS Principal, American School of Dubai, UAE, notes, “the glass ceiling still exists”, is an ongoing challenge. As she points out, “it’s been an historical factor and things just don’t change overnight.”

Madeleine Heide, Head of School, Lincoln American School, Buenos Aires, Argentina, highlights that, although we may see more women in lower leadership positions, the gap widens when you begin applying for a HOS position, and “women have to work harder to successfully secure a position at the very top level of our schools”. Madeleine recalls that she was interviewed for 15 different positions and was rejected.  Because it’s not that common for a woman to be HOS, she could feel them “wondering as they are looking at you ‘Can you lead?’ Here I am.”

This combination of lack of visibility of strong, successful women leaders, alongside the societal expectations of leaders, and the all-too-prevalent belief that there are limited positions for women, can lead to women feeling as if they’re isolatedly competing with each other for positions, rather than supporting each other.

In almost every interview, there was a story, or a piece of advice, about reaching back, and supporting the women who are rising up behind you.

Nina Shoman Danji, Assistant Dean of Learning Enrichment & Readiness and Moraine Valley Community College in Chicago, USA, identifies that all women should “support other women, even if you never got that support”. One of the most important skills that we should have as women leaders is to make sure that we are very collaborative, not only within our department, but also across campus. Her experiences have shown her that although many women who seek support from other women might not get it, “that doesn’t mean we shouldn’t give it.” We need to remain educated on the experience of other women so we can support them in their journey, even if it doesn’t mirror our own.

Developing a Circle of Support

Many of our Women Who Lead spoke about having a supportive circle of women to grow with. In particular, Joellen Killion, Senior Advisor, Learning Forward, shares the story of a circle of women colleagues who she has been meeting with for over 20 years, “who I deeply trust and value, who have committed to my growth as much as I committed to theirs.” She notes that it has always been a circle with no hierarchy, because they didn’t distinguish themselves from one another. Inside this circle, “we pushed and prodded each other, we challenged each other, held each other up, picked each other up. Every woman needs to be held up by her sisters.”

In addition to creating a circle of women you can turn to for support, Tambi Tyler, Head of School at The Colorado Springs School in Colorado, USA, talks about the importance of women being better mentors. She says “all women should be reaching back for other women across the depth and breadth of the organization”. Tambi believes that “mentorship is the secret sauce to becoming a leader and being a good leader. I would bet my right arm if we have as many women leaders mentoring as we do women leaders we would be unstoppable.”

With, or without the support of other women, it’s critical for all women to use their voice. Dr Chauntee Garrett, Superintendent of a K12 charter campus in North Carolina, USA, highlights the importance of speaking up on your own behalf. She notes that she was raised in a space where it was not acceptable for anyone to “project inequities, inequalities and disrespect” upon others, where you correct people where they stand. “When you are a leader, you have to be really clear about how you’re showing up in a space. If you can’t manage those spaces, they’re going to become more and more miserable if you’re walking away feeling disrespected, hurt & unsafe. That’s what gets created when we don’t say how certain things have made us feel. Everyone has a voice and everyone has value.” Every woman needs to use her voice.

Be a Model for the Next Generation

Several women mentioned challenging the idea that women leaders need to be more stereotypically masculine, moving towards modeling leadership that isn’t constrained by older ideas of gender roles. As Katrina Charles mentions, “Sometimes I notice now, women who are trying to go into leadership, they think they have to be ‘like men’. We have to look like the people we’re trying to be when in actuality we can lead with our femininity and still be effective leaders. At the end of the day, why should I have to downplay my femininity to prove my worth?”

Similarly, Katie Wellbrook, Assistant Principal for Academics, Suzhou Singapore International School, China, remembers that “When I got into leadership, there were 2 types of female leaders: mother hen & bulldogs (one of the guys) and I didn’t identify with either of those things. Being a young female leader, I had to carve my own path and determine what my leadership looks like. It’s very important for young women to see different versions of female leaders.” This leads to one of the important areas where women can support others – providing a model for the next generation.

This important sense of responsibility to model leadership for other women and future leaders to look up to was mentioned by many of the Women Who Lead. As Chauntee Garret explains, “Somebody has to come behind me. There has to be another Black woman that comes behind me. I’m not there to be the only one, I’m there to clear the pathway for someone else.” In the words of Katrina Charles: “It’s about solidarity, more voices, with different experiences, backgrounds and perspectives working for the same cause. Women in leadership needs to be normalized. This is a next generation we need to model for.”

After all, female leadership is not a pie that will run out, and, as Abeer Shinnawi, Founder of Altair Education Consulting in Baltimore, USA says, “We need to fix each other’s crowns, instead of tearing each other down.”

As women, and those who are advocates for women, when we can identify the external challenges that we face, we can be better prepared to meet them head on. With a community of support around us, anything is possible. Our Women Who Lead participants tell us that recognizing that they are not alone in facing these challenges has helped them have the courage to speak up, to reach out to other women for support and to advocate for themselves and their professional goals. In the next article, we’ll discuss the elephant in the room: the “old boys’ club” of international school hiring.

Leverage Your Leadership in Women Who Lead!

Does this resonate with your personal experience? Are you ready to own your leadership and make a difference in your school community?

Explore more from our women who lead and learn how to make an impact at: https://edurolearning.com/women/.

0 responses on "It’s Not Pie: Better Understanding the Lack of Opportunity for Women in Leadership"